Bust of ‘Scratch’ Perry for Hanover as part of ‘Jamaica 60’ 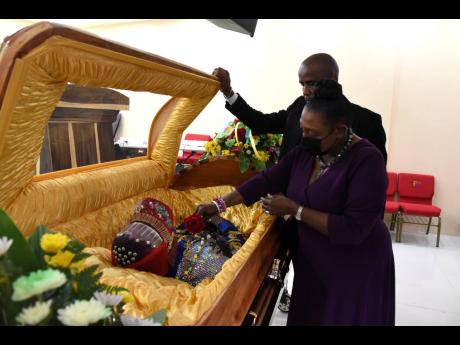 Culture Minister Olivia Grange places a rose on the body of Lee ‘Scratch’ Perry at Perry’s Funeral Home yesterday in St Catherine. Looking on is Peter Perry, CEO of the funeral home. The body was later transported to Hanover for burial.

A bust of dub pioneer Lee 'Scratch' Perry will be erected in Hanover as part of the Jamaica 60 Diamond Jubilee celebrations "as a fitting tribute to one of the parishes greatest sons".

Olivia 'Babsy' Grange, minister of culture, gender, entertainment and sport, made the announcement through her message at Perry's homegoing celebrations on Thursday.

She was represented by Tamika Davis, member of parliament for Hanover Western, at the ceremony on private property in Cauldwell. Perry was born and raised in Hanover.

She remembered Perry as a "one in a generation soul that the world was blessed with".

"Any reflection on his work, his music, his innovations, his mixing of sounds, can only conclude that he was a genius. Indeed, Scratch can be considered the Mozart of Jamaican contemporary music, in that he mastered the fundamentals of his craft, harmony and instrumentation, and then built on them. With his technical abilities, he simply could manipulate sound and created the early soundtrack of an independent nation," Grange's message said.

"In search of his own sound, his own beats, Scratch would experiment with drum machines; he would fire and record the sounds of guns, glass being broken, blow ganja smoke on to tapes (to enhance the sound quality), even sample noises made by animals. This approach earned him a reputation as an eccentric but we would all agree that 'genius' is never confined to the mundane or to a specific set of rules."

The short service, in keeping with the government's COVID-19 protocols, was led by Pastor Andrew Johnson and included a short bio by Perry's widow Mireille.

Perry passed away on Saturday, August 28, while on his way to the Noel Holmes Hospital in Lucea, Hanover. The cause of death has still not yet been revealed.