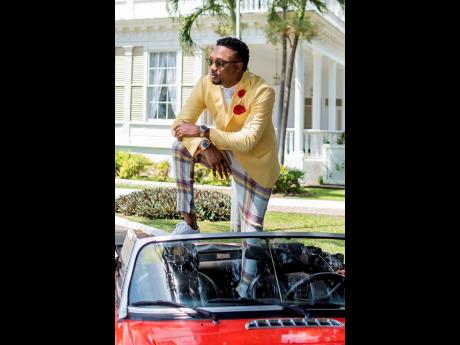 After losing his father tragically to COVID-19 complications, Chozenn was inspired to encourage himself and others to remain steadfast and never give up with the single Jesus Rock.

"My father and I relationship wasn't the best one, but forgiveness made it beautiful before his death," the gospel reggae artiste told THE WEEKEND STAR.

The single was released this year and saw Chozenn partnering with producer Rohan 'Patexx' Rankine to create a high-spirited track with positive and uplifting lyrics.

"This song took me out of depression and it also motivated my family and many others globally," Chozenn said.

He described his late father, Lewis Besentie, as both vibrant and adventurous, and one who was always out and about in a festive mood and took great pleasure in bringing joy to those around him. He recalled the delight of visiting other family members with him in the country and always appreciating his words of wisdom.

"He always used to say, 'Son, if yuh nah go do weh ya do good, doh dweet,' hence my posture for always aiming for excellence in anything I do," he said.

When it comes to his label, it's a family vibe. Even though, he admitted, Rankine isn't an active Christian, his heart and fear of God are amazing.

The visuals for the track, directed by Hybrid Media Concepts and powered by Chozenn Media Group and Journey Music, conveyed an elevated message of pushing through the trials and tribulations and remaining confident and committed to your purpose.

"It's fair to say the song was an instant hit," the recording artiste shared, noting that it surpassed his expectations to become a global anthem.

"I'm blessed in that regard. The song just tek off and gone. So to God be the Glory," he said.

Chozenn has even engaged with his social-media family by starting a 'Jesus Rock' dance challenge and a Bible challenge. The initiatives began as promotional tools for the single, but he has received tags from persons showcasing their dance talents. Many also shared their own issues and experiences. As for the Bible challenge, it quickly transformed into 'edutainment', with Chozenn set on encouraging the youth to pick up the Word and read a scripture, which will in turn improve Bible-reading skills and boost their self-esteem.

With his reason for remaining hopeful amid adversity and tragedy clear, Chozenn is happy to honour and celebrate all the good his father did with God's love.

"I'll remember him as a trying man who gave his best to his family and friends," he said.