Lexi D Bess was ‘the life of the party’ 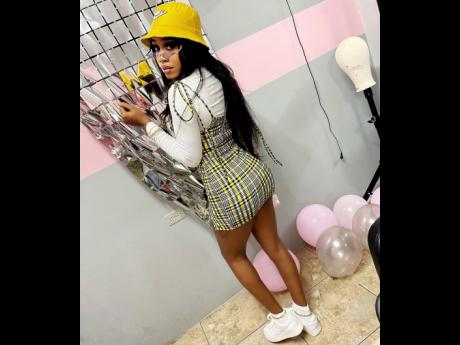 Family and friends fought back tears while reminiscing on how Lexian 'Lexi D Bess' Williams was always the life of the story. They told stories of how her presence, ambition and willingness to help others brought laughter to so many in the Rio Bueno community where she had spent most of her life.

A popular YouTube vlogger, 'Lexi D Bess' perished in a road crash along a section of the North Coast Highway in Trelawny last Friday night. The 20-year-old social media influencer had only just left a cookout and was on her way to another event, when the Toyota Mark X sedan --which was heading from the direction of Falmouth towards St Ann -- driven by her boyfriend, 25-year-old Kenroy Smart, collided with a Toyota Voxy, which was travelling in the opposite direction. Both Lexi D Bess, who was in the passenger seat and Smart died on the spot, along with the driver of the Voxy, 31-year-old Chris Codnor.

When THE STAR visited her home in Rio Bueno on Saturday, family members and friends stood around with blank stares etched on their faces.

"From her primary school days at First Hill All-Age to Albert Town High, she was the life of the party and the entertainer. She was always dancing and giving jokes," recounted her brother, Owayne Lowe.

He told THE STAR how his sister looked forward to the relaxing of COVID-19 protocols, which restricted the staging of entertainment events. Those restrictions ended last Friday.

"The cookout was the first thing to get her back to the activities she loved. Lexi had ambitions to become known worldwide, and she was on the way. She had her YouTube channel where she had blogs and advertised parties and other entertainment events," Lowe said.

As he pulled his hoodie over his head, Lowe said he looked forward to see her in entertainment contests.

"She along with some friends had just won a 'Juss Buss' contest. From one night she won a talent contest put on by Charlie Chaplain right here in Rio Bueno she never looked back, just one forward movement," he added.

Andrew Givans, a deejay from the same Rio Bueno community, remembers Lexi as a positive person with whom he shared the stage on many occasions.

"Mi an har always a perform. She was a leader. You go to har to discuss business. She always have a positive vibes. A nuh mi one a guh miss har. Hundreds a wi. Look pon har YouTube followers," the DJ said, in between humming a tune.

Lexi's parents were overcome with grief. Her mother, Sharon Parris, paced the verandah looking out on the street.

"Mi can't talk," she said, waving off efforts to get a comment.

Father Douglas 'Dougie' Williams was away in nearby Jackson Town when he got the news. According to Anniecea Harrison, a cousin of Lexi, Dougie, like many in the community, is in a state of disbelief.

Harrison went on to describe Lexi as a comedian who always made people laugh, a similar sentiment shared by shopkeeper Marcia Parke, who expressed sadness at her passing.

Parke said many persons were at the cookout and Lexi had been working the bar. Her reaction when she heard the news was shocking.

"I said 'no sah, is like five minutes ago she was in the bar'. The whole place was stunned. People couldn't eat their food and the music almost stopped playing."

Parke described Lexi as "a mannersable girl who had no enemies".

"You could always say 'Lexi give me a joke', and she would make you laugh."