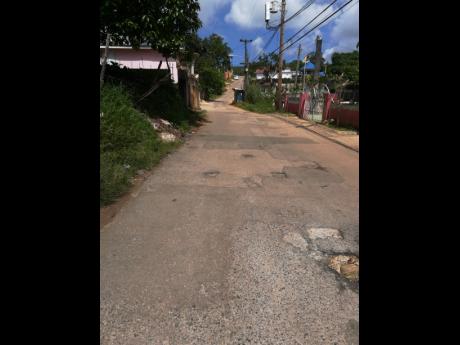 The section of Greenvale where five young men were shot on Thursday afternoon.

Investigators in Manchester are probing a shooting incident on Thursday afternoon, which resulted in five persons nursing gunshot wounds.

Information reaching THE STAR is that the group, which included adults and teens, were playing football on Bethel Street in Greenvale, about 5:40 p.m., when a Toyota Vitz motor car drove up.

Reports from the police are that two men alighted from the vehicle and opened fire at the group.

When the shooting subsided, five young men were found suffering from gunshot wounds.

The police were summoned and the injured were assisted to hospital where they are still being treated.

One of the injured, a Mile Gully High student, was shot four times.

Member of Parliament for North West Manchester, Mikael Phillips, says the incident has left the community in a state of shock.

“The community of Greenvale that persons have branded as one of the most volatile communities, we haven’t had anything like this in the community for quite a few years. The youths felt free enough to be playing football in the afternoon,” he said.

“No one was expecting this … one young man said he had just finished playing and sat down, when he saw the men with the guns … some were able to run, one woman said she froze and the young Mile Gully High student was found in bushes because he couldn’t run any further after being shot,” he added.

He said the rise in criminality has left the residents and citizens of the nation despondent and there is now a greater need for a national crime plan.