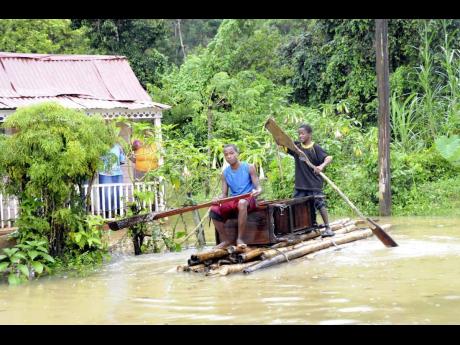 In this 2010 photo, two teen boys use a raft to traverse the floodwaters in their home community of Chigwell in Hanover.

Residents of the communities of Chigwell and Forest in Hanover say they are now living in fear that another major flooding incident could affect them.

Recently they saw minor flooding caused by heavy rain associated with Tropical Storms Ida and Grace. One man, who gave his name as Clarence, told THE WEEKEND STAR that his entire family is from Chigwell and still live there despite repeated flooding.

"A right here so mi born and a here so mi gwan bury after mi dead," the elderly farmer stated.

"The worst flood that wi ever see is the June flood inna 1979, when every single piece a land inna the area cover wid water, an then wi have a similar flood like that inna 2011, mi think. At that time, a remember seh a Dr Horace Chang a did minister a water and housing, and him was the man who come round here come visit wi nuff nuff time, and during dem time deh, a just boat mi did haffe a tek fi lef mi yard, an tek boat fi come back."

Clarence recalled that every household was affected badly by the flood, and the floodwaters took weeks to recede.

"That was the time when Chang come back and give wi some land up a the top a Old Pen fi relocate. But nuff a wi still never move, because a farming wi do, an him only gi wi house spot, him neva gi wi farm land."

He added "So right now when mi see how the rain a fall, and the water a rise up, all a di bad memory start to come back, an mi haffe cry out to God fi hold him hand an nuh mek this disaster happen again."

Clarence said most of the residents have moved to other areas, and some have gone overseas leaving their children at these premises.