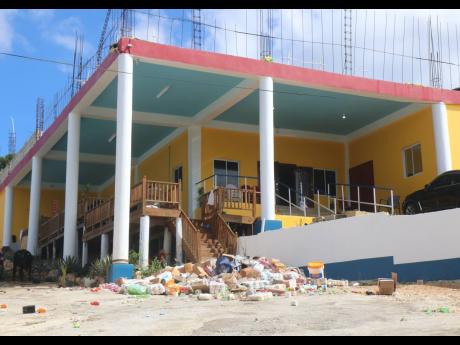 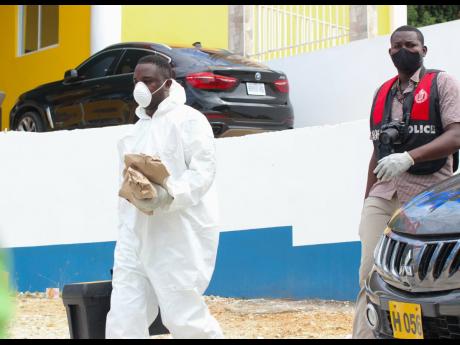 Investigators at the crime scene at the Pathways International Kingdom Restoration Ministries church.
1
2

A woman whose son was killed inside the Pathways International Kingdom Restoration Ministries on Sunday night is accusing the church of fooling him that he would receive a kidney.

Sharon Parkins, 58, the mother of Michael Scott Brown, 38, who was stabbed and shot during an alleged sacrificial ritual, is calling for justice to be served against the pastor, Kevin O. Smith, and his followers. Parkins said that Brown, her oldest child, was a former employee at Versair at the Sangster International Airport in Montego Bay and was suffering from kidney disease.

"The last time mi talk to him was one day inna last week," Parkins said. "Him sick wid him kidney and did admit inna Cornwall Regional Hospital, an me did a look seh if him dead, it would a be because him kidney fail him. Mi neva did a look fi dem kill him at the very same church that him go." Brown leaves behind a 12-year-old daughter.

Parkins said she was told that he left hospital without permission because the pastor allegedly promised to get him a new kidney.

"Sunday evening him get a phone call seh him must come up a the church, so him discharge himself out a hospital and go up there," she said. "Mi used to go a the church but after mi see how the pastor a spin round people and deh spit inna them face, so mi seh 'no sah, this yah cah right, so mi nuh go back deh'."

Parkins said she was told that when Brown got to the compound, the pastor told him that he was of unclean blood and was not worthy to go on the ark. She said that she was told that her son still had the hospital tubes in his body, but Smith dragged them out.

"I hear that when my son see him do that, him turn and a try fi run and them run him dung and stab him inna him neck and shoot him inna him back," she stated. She also stated that despite hearing about the incident on the news, she never knew that her own son was among the victims. She was about file a missing person's report when she got the sad news.

Brown's sister, Petrina Malcolm, said he was a kind, loving and caring individual who never deserved to die in that manner.

"He was the basic tough kind of older brother who encourages me to read my Bible, learn the 10 Commandments, encourage me to go to school, study, and always tells me to save," she said. "I am feeling very bad, nauseous. I feel very angry that he was killed in that manner and persons like Pastor Smith must rot in prison."

Malcolm said she also attended the church but said Smith gave her a creepy feeling.