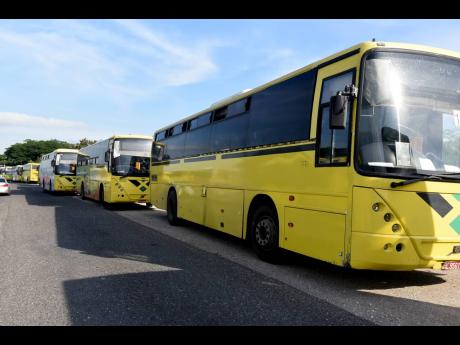 Jamaica Urban Transit Company buses parked outside the company’s Portmore, St Catherine depot as drivers protested against what they consider the unfair treatment of their colleague by cops.

A Jamaica Urban Transit Company (JUTC) driver was slapped with charges of disobeying a constable's orders and resisting arrest after he allegedly refused to reverse one of the state-owned units because he felt it was unsafe.

The incident, which took place last Friday night, was captured on video, and saw the bus driver being pulled from the bus by two police officers. It is alleged that the driver, attached to the Rockfort, Kingston depot, had parked his bus in the lay-by sometime after 8 p.m. It is understood that, when the time came for his departure, he signalled to a man who had parked in the lay-by, allegedly blocking the bus, to make way so he could leave.

The man reportedly told the bus driver that he could leave the lay-by by reversing, but the JUTC employee insisted that it would not be best practice as it would be unsafe. A dispute developed and the man reportedly summoned two on-duty officers who yanked the JUTC driver from around the steering wheel.

Upset with the treatment meted out to their colleagues, JUTC drivers withdrew their services yesterday morning, leading to many persons being inconvenienced. Some commuters in Spanish Town, St Catherine had to dig a bit further in their pockets yesterday for bus fare as some public passenger buses raised their fares as they sought to capitalise on the strike.

"I notice it has been a trend in the way the police will talk to you if you violate the Road Traffic Act. If I make a violation, it does not give them any right to 'bwoy mi up'. Mi pass certain age so don't come put yuh hand on mi. If we don't stand up, it nago stop," one protesting driver told THE STAR yesterday.

Another bus driver told THE STAR that it was almost impossible for his colleague to reverse in a lay-by, as was allegedly requested of him on Friday night.

"The police could have easily moved but he decided he was playing hard. He dragged the driver and began to haul and pull him with passengers in the bus. The company's revenue was left in the bus as well and he was handcuffed and was taken away," the man said.

T HE STAR reached out to head of the Kingston Central Police Division, Superintendent Maldria Jones-Williams, for a comment but calls to her phone went unanswered.

Meanwhile, corporate communications manager at the JUTC, Cecil Thoms, said the decision to resume work came after yesterday's meeting with the police high command, as well as union representatives and management of the JUTC.

"A commitment was given to investigate what has taken place and we were advised that it was [of the] highest consideration of the police commissioner," Thoms said.