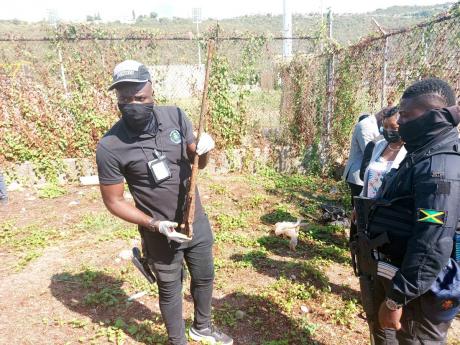 Police personnel show one of the rifles that was found yesterday at the Stadium East field. 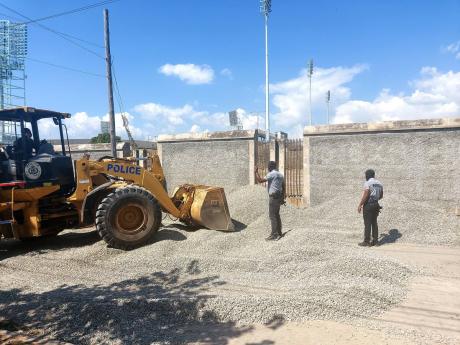 Deputy Commissioner of Police Fitz Bailey said that Monday's seizure of five firearms and the previous day's recovery of three other guns at the National Stadium East field on Mountain View Avenue speaks to the determination of the Jamaica Constabulary Force (JCF) to crack down on criminality.

"What you are seeing here is strict police intelligence and we will not relent until we are satisfied with this operation. We are coming for all the guns," said a bullish Bailey during an interview with THE STAR. The eight firearms, including six high-powered weapons, were seized along with four ballistic vests and ammunition during the operation carried out jointly by the JCF's Counter Terrorism and Organised Crime Investigation Branch and the Specialised Operations Branch. Seventeen illegal weapons have been recovered by the police in the area in the past two weeks.

Bailey watched intently as his men sifted through a heap of sand and gravel along a sidewalk on Statue Road close to the field. A Glock 45 and a 9mm pistol were found. The police intensified their efforts and were rewarded shortly after with the discovery of a sniper rifle, buried on the compound of the mini stadium, a few metres away from the parking lot.

As the search continued hours later, and with members of the Jamaica Defence Force joining in, the police recovered two other weapons, an AK-47 and M-16 rifle along with two magazines and sixty 5.56 cartridges. Bailey lauded the lawmen for sacrificing their family time and 'Sunday dinner' in order to get the job done.

"When you hear the stories, some of them were actually preparing their meals when they got the call for duty. They abandoned it and came and spent the entire day, and all they got was some KFC that we bought and ate in a communal sense. All of this is for the interest of protecting this nation, going beyond the call of duty," he said. "We are not going to allow our country to be held down by criminals. It is one of my deepest desires to see Jamaica a peaceful environment for all Jamaicans to live in."