Mother says son not capable of being a gangster 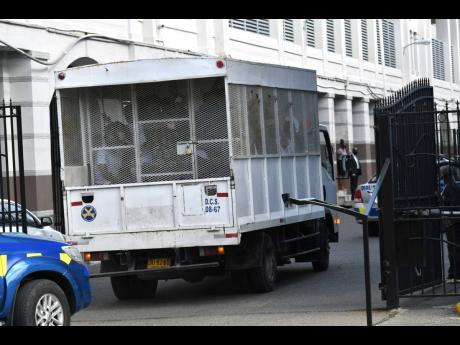 The mother of one of the alleged Clansman-One Don gangsters yesterday testified that she was devastated by the news of his arrest and said that he is not capable of being in a gang.

The St Catherine woman described her son, Brian 'Rooster' Morris, as being very quiet and shy and "someone who is willing to work." She further told the court that her son had never given her any reason to believe otherwise.

"I raise my children to be law-abiding citizens so I expected nothing less," said the mother who took the stand after Chief Justice Bryan Sykes permitted her son to re-open his case.

When asked by Morrison's attorney Denise Hinson if she knew why he was on trial, she replied: "From what I heard he is part of a gang." She was then asked to describe how she reacted to that news.

"I was devastated and even until now I am," she said. But she also told the court "The child that I have, Brian, is not capable of being in a gang." The mother said that she and her son had a very close relationship and that although he had left her home when he was 22, they spoke almost daily.

Morris is one of 28 remaining defendants in the trial including reputed gang leader Andre 'Blackman' Bryan. Morris, who had given an unsworn testament as part of his case, said that the two prosecution witnesses, who are ex-members of the gang, were not being truthful.

"I never shot or kill anyone, never been to Jones Avenue or Shelter Rock," he had said. "I don't have any don in my community and I don't take orders from anyone."

Meanwhile, attorney-at-law Abina Morrison, who is representing defendant Kalifa Williams, had to postpone her case, after the prosecution objected to the marshalling of evidence that was being elicited from a senior officer from the Horizon Adult Remand Centre.

The officer had appeared after the attorney had requested the prisoner admission records which would indicate the period for which her client had been in custody. Williams, during his unsworn statement, had testified that he had been in prison for almost all of 2017 and could not have been involved in some of the incidents that the witnesses claimed he participated in.

But the prosecutor objected on the grounds that the statutory standards had not been met and that the evidence would not be admissible. Chief among the objection was that the witness was not the maker of the information nor was the creator identified. Consequently, the matter was postponed for efforts to be made to have the correct person brought to court.

Three other lawyers had also requested records from the Spanish Town Police Station, but the officers who took the records to court yesterday could not speak to them. Hence, the judge instructed the defence to have words with the police to have the matter sorted out. The trial is to resume today in the Home Circuit Court.