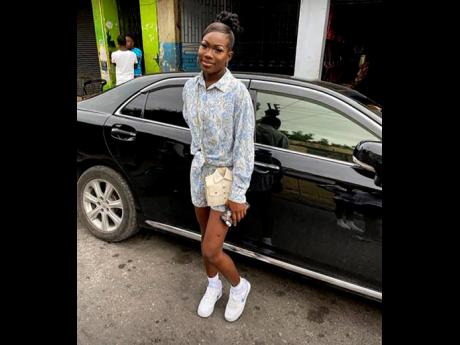 Despite being a teen mom, Devonise Nelson was determined to get a high school education and was well on her way to achieving high grades before her life was snuffed out Sunday night.

Devonise, otherwise called 'Pinky', a 17-year-old Denham Town High School student, was at the home of her child's father when explosions were heard around 11 p.m. The police were called to the area and Nelson, who was the mother of a four-month-old boy, was found with a gunshot wound to the head. The police have listed 17-year-old Eric Murdock, otherwise called 'Brando', the father of Devonise's child, and Tevin Cross, who are both of Water Street addresses, as persons of interest. Novette Christian, vice-principal of Denham Town High School, said Devonise was a promising and brilliant student.

"She started attending this school in January and she showcased a lot of potential. She was doing really well and it was just last Thursday that she went to her science teacher to show her CXC log book and the teacher told her that she was well on her way to do exams next year because of the work that she was putting in," she said.

"It's sad to know that she just left us like that. The children in 10D [Devonise's class] are going through a bit of sadness right now. We have had counselling sessions for them and they expressed their feelings through writing and so on. They were supposed to sit exams this morning [yesterday] but we had to postpone them because they were not in a frame of mind," Christian said.

Though he saw her body, Devonise's brother Veron Nelson remains in disbelief that she is dead. Standing in their yard on North Street in Kingston, Nelson said that when he got the call that his sister had been killed, he thought it was a prank.

"Mi start get bare call and everyone ask weh mi deh but was laughing and a tell mi self say a joke dem a make because my little sister couldn't dead. I was in the country and even when mi come and see di crowd, mi still nuh believe. Even now mi a talk to yuh, mi nuh believe she dead," he said.

He said Devonise had plans to become an entrepreneur and even operated a small business.

"She go school but she do her little business where she make beads and so on. She had plans for her son and our father was in the process of filing for us including her baby," he said. "Mi keep on a tell myself say is not mi likkle sister, enuh. Mi try mi best not to tink bout it but mi have to accept it same way," Nelson added.