Widow of murdered teacher says his killers are victims 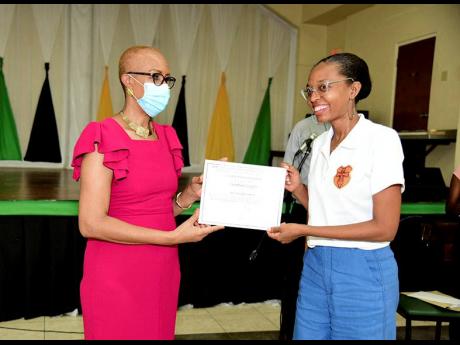 Fayval Williams (left), minister of education and youth, presents a certificate to Khadene Guyah, who has trained other members of her community on how to use core values to reduce conflict, under the Hope Area Churches Organisation Values and Attitudes ‘Ambassadors’ training programme.

A Kingston woman whose husband was murdered by gunmen two years ago has described his attackers as victims.

Speaking at the Hope Area Churches Organisation's Values and Attitudes 'Ambassadors' Awards Ceremony, held at the Sts Peter and Paul Church on Sunday, she said that the thought of retribution crossed her mind after her husband was murdered.

"When it first happened... I had thought, 'Why not? The person [murderer] should feel as much pain as I am, but then you realise that the persons who might have been involved are just victims as well," Guyah said.

Her husband, a teacher of Deanery Road, Kingston 3, and 36-year-old Richard Williams, otherwise called 'Tuppy', a tyre repairman of Spanish Town Road, Kingston 11, were killed on March 17, 2020. Williams and Kedo were at a tyre shop when they were pounced upon by men travelling in a Honda Stream motor car who opened gunfire hitting them.

It was reported that her husband was helping his twin brother at the repair shop when gunmen struck.

"When his brother called [with the news], I was at home preparing for a [school] assignment. It was a shock because I'd just spoken with him. I'm usually with him; the only reason why I wasn't that day is because of school. I couldn't understand it... . It didn't make sense," she said.

The police arrested and charged two men in connection with the double murder.

On Sunday, Guyah said that having a strong support system helped her get through the ordeal.

"If I didn't have the support, I don't think I would be standing here. We must help each other," she said.

The widow was among 14 ambassadors from the 10-week training programme who were tasked to train others on how core values and attitudes can help to reduce negative outcomes from conflicts in their communities.

Guyah said she received help "every step of the way" to cope with the painful experience of losing her husband to gun violence. She said the help received from the Ministry of Justice's Victim Support Unit, the Caribbean Graduate School of Theology, her church community, family, and friends assisted her in the process of grieving and forgiving.

"There are moments where I just feel sad because my husband and I were very close... we were partners [and] we did everything together. So it was quite a transition to being a single mother, studying, working, and having a lot of things to do on my own," Guyah said.

"Having my faith in Christ gives me hope beyond what this world has to offer. It has been challenging, but as I make that decision each day to get up, knowing that God is with me and that he will help me and that he will provide the resources, be it personal, financial, whichever, I'm assured of his presence, and that helps me daily," she said.