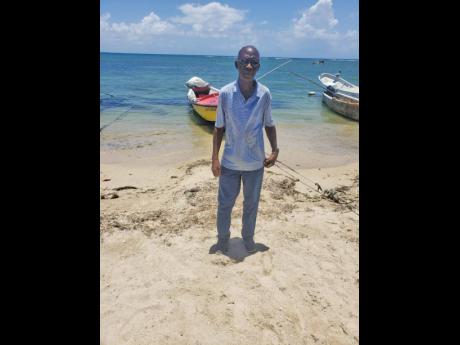 Like the biblical Jonah, who was in the belly of a whale for three days, little did the Gordons know that they would be lost at sea for the same amount of time.

"We left out in our small canoe, engine attached, for our usual nightly trip. Five hours out at around 9 p.m., a big wave came and filled the boat with water. It was an unusual occurrence. The normal thing is for the boat to ride the wave," Ashton, who is also a tailor, recalled. The veteran fisherman said that the sea gives warnings about what to expect. There is a raw odour when the bottom of the sea is stirred up and when the waves start rocking the boat excessively, it is time to go in.

"On this Thursday night there was no warning. We bailed out the water and tried to start the engine but nothing happened. Fear was written over Cornie's face. I too became fearful but I did not show it. The wave started to push us out further and Trelawny Beach Hotel which was once in sight disappeared," Ashton said.

The night went by and when the sun rose on Friday, the only signs of life were birds and fish.

"The boat had some plyboard which was our seats. We ripped them out to use as oars. They were too big and didn't work. All this time the sun was beating down on us. Thirst was driving us crazy and it was soon joined by hunger. Every kind of thoughts, both negative and positive, crossed our minds. Cornie suggested that we swim to shore, but we were too far out and that would mean death by drowning," Ashton, now 84, told THE STAR.

The Gordons had no form of communication to other fishermen and relatives as, unlike fishermen today, they had no cell phone with a compass downloaded on it.

"On days when we were at sea there was always a ship passing by. On this occasion not one ship was seen," Ashton related. Hunger and thirst took over their bodies and there was no rain to quench their thirst.

"We decided to drink some of the sea water. It was more bitter than salt and couldn't go down," Ashton recalled with a sigh. Though the evening brought cooler temperatures, the Saturday morning sun brought more heat and dwindling hope of survival. According to Ashton who fished for 52 years, God and his angels were on their side. With hopes of being saved fading a saviour arrived.

"Mister Pat, my good friend, had not given up hopes of finding us. He came looking for us. When Cornie saw the boat he took off his shirt and waved. Normally, I could use my fingers to blow a whistle. I tried but no sound came out. Some friends on the boat helped us aboard. All they had on board to drink was a popular soft drink. We drank it real fast and wanted more," Ashton said, while demonstrating how he held the bottle to his head.

The father and son were taken to the hospital where they were properly hydrated and fed.

Cornell, who represented William Knibb High School in the daCosta Cup, migrated to the US shortly after. His sister Beverly warned them not to go back to sea. Cornie obeyed but Ashton continued until 2010.

"I love the sea and I go swimming for my exercise. Three days per week I leave Coopers Pen to Falmouth for my swim and sit down and lyme with my friends," he told THE STAR.