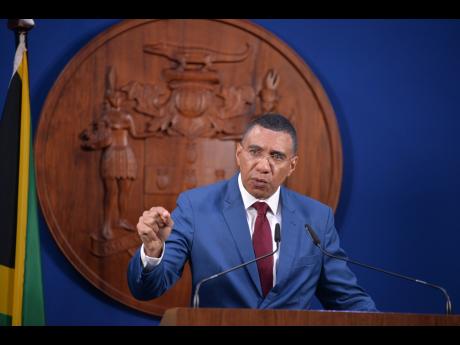 Prime Minister Andrew Holness addressing a press conference at the Office of the Prime Minister on Tuesday (December 6) to announce States of Public Emergency (SOE) in several parishes and police divisions islandwide. (Contributed)

Prime Minister, the Most Hon. Andrew Holness, has warned perpetrators of crimes that the Government will be relentless in combatting their criminal and violent intent.

Mr Holness noted that there are several countries in the region where the level of criminally organised violence by gangs is threatening the foundations of the State.

“We will not have that in Jamaica as long as I am your Prime Minister,” he pledged.

Mr Holness was addressing a press conference at the Office of the Prime Minister in St. Andrew on Tuesday (December 6), where he announced the declaration of States of Public Emergency (SOE) in several parishes and police divisions islandwide.

The Prime Minister said that the Government will continue to build the capacity of the security forces to respond to threats of violence.

He said that the tactical effectiveness and efficiency of the police force has improved, and intelligence is being used to nab the criminals at the point at which they are planning or committing crimes.

Meanwhile, the Prime Minister said that while emergency powers are an important part of any society, the Government has no intention of abusing these powers.

He noted that in the various iterations of the SOEs “we have improved the regulations taking into consideration the public debate, the arguments put forward by our courts, which we welcome. It has helped to refine the measure as it is provided for in the Constitution”.

Mr Holness said that “we have some really serious criminal threats facing us and we have to use all the powers at our disposal”.

“I believe Jamaica understands that while the Government is trying to improve the legislative framework and the capacity of our police to be able to execute their jobs with greater technology, greater efficiency, greater training, we have to ensure that our homicide rate and the level of violence that citizens experience on a daily basis do not get to the point where it threatens the collapse of the State.”

The SOEs have been declared in the parishes of St. Ann, Clarendon, St. Catherine, specified areas in Kingston and St. Andrew, St. James, Westmoreland and Hanover.

SOEs were previously imposed in several of the areas on November 15 but ended on November 29 after the Resolutions to facilitate the extensions failed to achieve a two-thirds majority in the Senate.