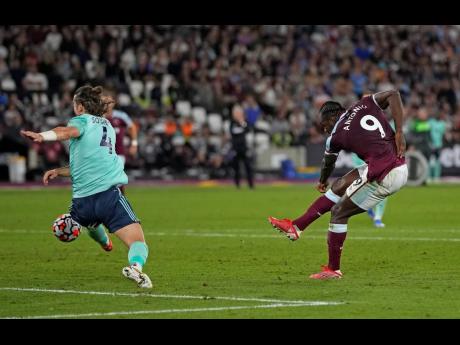 As he awaits a potential call-up to the Reggae Boyz squad for the upcoming World Cup qualifiers, West Ham striker Michail Antonio hit top form in the English Premier League (EPL) with a history-making double against Leicester.

Antonio, 31, scored twice in West Ham's 4-1 win over Leicester City yesterday to become the club's top all-time EPL goalscorer. Having equalled the record set by Paulo Di Canio (47) in last week's season-opening win against Newcastle United, Antonio scored his 48th and 49th league goals for West Ham, who took advantage of the 10-man Leicester City's after Ayoze Perez was given a straight red card for a dangerous challenge.

Speaking to Sky Sports after the game, Antonio admitted that the pressure on him to break the record did weigh on him, but he was more relaxed after half-time

"Obviously, as a footballer, you got to be professional and try to stick to it. But making history, it's in the back of your mind. I felt in the first half it kind of affected me, but second half, I came out and I did the job," Antonio said.

Antonio has scored three goals already this season, and after two games, West Ham have six points and have the early lead atop the table with more goals scored (eight). Chelsea, Liverpool, Brighton, and Tottenham all have six points and a goal difference of five but have all scored less than West Ham.

Antonio had stated his intention to switch allegiance to Jamaica earlier this year and since April, began the process of obtaining a Jamaican passport. He was named on the provisional list for the 2021 Gold Cup squad but did not receive his documents in time for him to be selected to the final roster. However, Jamaica Football Federation president Michael Ricketts recently confirmed that Antonio has received his passport as well as Ranger's striker Kemar Roofe, clearing the final hurdle for them to be capped by the Reggae Boyz.

Jamaica will begin their World Cup qualifying campaign on September 2 against Mexico in Mexico City before playing Panama at the National Stadium on September 5.