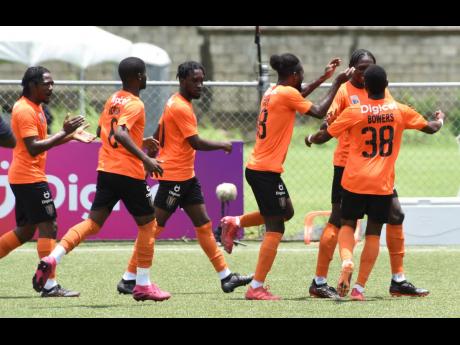 With their play-off tickets in hand, assistant coach Dwayne Blake says Tivoli Gardens are ready to finish the revival that they started last year with nothing less than a championship title.

While Tivoli missed their opportunity to claim an automatic berth into the semi-finals after being held to a 1-1 draw with Molynes United in their regular-season finale on Saturday, the west Kingston-based club had already clinched their place into the top six by beating Humble Lion on September 4.

Last year, Tivoli Gardens were in the midst of a midseason turnaround in the Jamaica Premier League and were intent on honouring the memory of their late president and former Prime Minister Edward Seaga who passed away before the start of the 2019-20 campaign. From being near the bottom of the table, Tivoli were in a play-off spot before the pandemic pulled the plug on the season.

With this season's new lease on life this year, Blake said that they are ready to complete the mission that they feel was left unfinished.

"Last year based on how we were playing, we thought that we would have won. But now we have come back this season and we picked up (where we left off)," Blake said. "We started off a little slow but we picked up in the middle of the season and now at the end."

Tivoli Gardens finished the season with a seven-game unbeaten run which included three wins. Although given the context of a truncated season, Blake says that he feels that his team is ready to attack in their first post-season appearance in three years.

"What we have to do is continue to work hard and whenever the quarter-finals start, then you will see a different Tivoli team coming out," Blake said.

Defender Odean Pennycook, who was not a part of the team last season, says that they do not fear taking a long road to the title.

"Whatever happens, we are ready for it," Pennycook said. "We are prepared, we just have to keep focused." Tivoli Gardens ended the regular season in fourth spot on 17 points, two behind leaders Waterhouse.