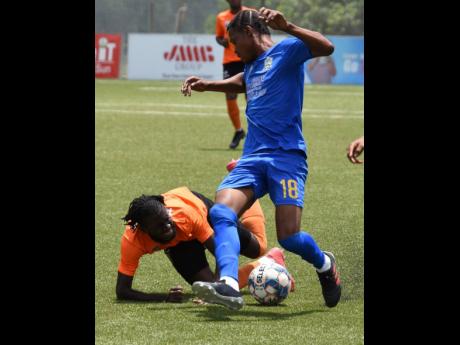 Devroy Grey (left) of Tivoli Gardens goes down after a tackle by Oniel Small (right) of Molynes United during their Jamaica Premier League match at the UWI-JFF Captain Horace Burrell Centre of Excellence last Saturday. The match ended 1-1. 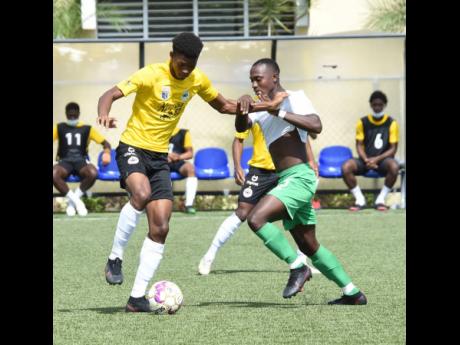 While it may only be a one-round regular season this year, Waterhouse managed to finish the job they started last season, earning themselves an automatic berth into the JPL semi-finals as the number one seed. And while head coach Marcel Gayle may not say it publicly, eliminating reigning champions Portmore United in their regular-season finale 1-0, the team that has beaten them in the last two finals from the play-offs, is not a bad bonus.

Three weeks ago, Cavalier were in seventh place with their play-off credentials called into question. While results last Friday confirmed their play-off berth, Kyle Ming's late strike which gave them a 1-0 win over Vere in the regular season pushed them straight to the semi-finals. They are still focused on the long-term development of their players but they feel that they have what it takes to end a more than two-decade wait for a national title.

Everything that could have gone right for Harbour View did last Friday. Portmore United's loss to Waterhouse and Dunbeholden's 5-2 defeat by Mount Pleasant left their play-off destiny in their hands in their regular-season finale against Arnett Gardens. Needing a win to get the last play-off berth with a majority young squad, it took a rocket free kick from veteran Lovel Palmer to win the game and punch the last ticket to the JPL postseason. Their road to the title starts tomorrow against Mount Pleasant in the first leg of the quarter-final.

They were more or less through to the play-offs based on the early results but Mount Pleasant made a statement in their 5-2 win over Dunbeholden. Despite the scoreline, it was a lot closer than it seemed, but Mount Pleasant pulled away in the second half and did enough to deny Dunbeholden any chance of a comeback. A goalscoring blitz like this should give Mount Pleasant confidence in their quarter-final tie against Harbour View, and despite not holding on to the automatic semi-final spot, they will be a formidable opposition.

They had everything lined up for them, control of their own play-off destiny. Starting the day in sixth place with 14 points, a draw would have been enough for them to go through. And for most of the first half against Mount Pleasant, it was going that way, but Mount Pleasant goalscoring blitz crushed the St Catherine team and their 5-2 loss left them hoping for Arnett to beat Harbour View to hold on to their play-off place. Instead, Harbour View's 1-0 win over Arnett shattered their play-off dreams. A glorious opportunity squandered and Dunbeholden will have to reflect on what might have been.

It hasn't gone right for Portmore United since the coaching change and they were facing a Waterhouse team full of confidence. A 1-0 defeat sees them out of the play-offs and bringing an end to their two-year reign at the top, guaranteeing that new champions will be crowned this season. It will not look good on Garnett Lawrence's resume but he was only in charge for two games. If he does get the job full-time, he should have an opportunity to put his own mark on the team.

Vere United's form going into the postseason is worrying. They were winless in their last three games and losing late to Cavalier stings, but it should not take the gloss off what has been a great season for the Clarendon-based club. Doomed for relegation last year when the season was cancelled, Vere have taken advantage of their new lease on life and booked their first play-off berth in their second season in the top flight, and in Donovan Duckie's first year as head coach. They are naturally in it to win, but whatever happens in the play-offs, they should be proud of the improvement they have made.

Head coach Alex Thomas will have a lot to think about in the offseason. In this truncated format, they just didn't do enough to make themselves competitive. In the end they finished their season with two wins, two draws and six defeats, the last of which came in their regular season final against Harbour View. Can they bounce back next season? It will depend on what moves the club can make to improve the squad.