Powell back with his club 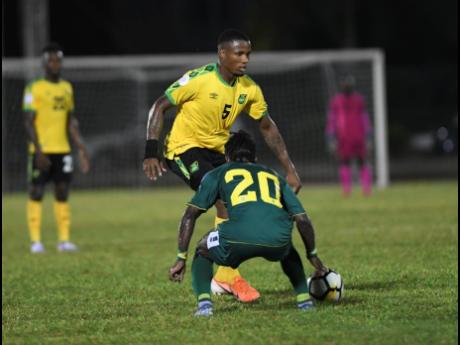 National senior team defender Alvas Powell is out of today's Concacaf World Cup qualifier against Honduras with a groin injury.

The 27-year-old Powell was injured during the first half of the Reggae Boyz's game against Canada at the National Stadium and was substituted in the 37th minute by head coach Theodore Whitmore. The match ended in a 0-0 draw.

Dalton Wint, general secretary of the Jamaica Football Federation, has confirmed that Powell will miss today's encounter as he has aggravated a groin injury which he has been carrying for some time and therefore he has since returned to his Major League Soccer club, Philadelphia Union.

"He was tested and he has a grade one groin injury and so he is out of this game against Honduras and he will be returning to his club for treatment," said Wint.

"He is an integral player and he has played all the games, so missing out on the experience of a Alvas Powell will definitely have an effect on the team," he said.

With Powell out, the Reggae Boyz squad for tonight's match has now been reduced to 19 players as they seek to register their first win of the campaign.

The Reggae Boyz are currently at the bottom of the eight-team standings with two points from five games. The Hondurans are second from bottom on three points. Mexico lead the standings with 11 points ahead of the United States and Panama on eight points each. They are followed by Canada (seven), Costa Rica (six) and El Salvador (five).

Wint pointed out that the JFF would have liked to add more players to the current Reggae Boyz squad but because of the COVID-19 restrictions they are not able to do so.

"The fact is the coach has prepared players over the duration of the World Cup qualifiers so we should have ample replacements for Alvas," said Wint.

"We believe in the players that we have here and I am confident that they will do well against the Hondurans," he said.