Busby excited to welcome Shaw back for international duty 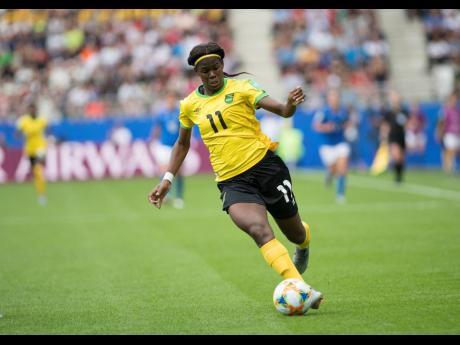 It has taken longer than anticipated, but national senior women's head coach Hubert Busby Jr says that he is looking forward to welcoming national striker Khadija Shaw back to international duty for the first time in 20 months.

Shaw, 24, was among the 22 players called up for the Reggae Girlz international friendly against Costa Rica next Sunday in Fort Lauderdale, Florida. The squad was scheduled to report yesterday to start their one-week training camp ahead of Sunday's game, which is a part of their preparations for the World Cup qualifiers that have been rescheduled to start in February 2022.

Shaw's absence from international duty for this long has not been by design. The COVID-19 pandemic had halted international football until June 2021. She was then given permission to withdraw from the summer friendlies against Nigeria and world champions the United States to finalise her move to English club Manchester City, as well as to recuperate after a long 2020-21 season in France.

Finally back into the fold after such a long absence, Busby says that he is excited to have her back and pleased that she is returning in good form with her new club.

"For us, she is the best striker in the world, and I wouldn't trade her for anybody," Busby Jr told STAR Sports. "What she brings to the group on and off the field is very important. And she is doing it and playing, performing at the highest level. You can't say enough about what she is doing."

Shaw, who is the nation's all-time leading scorer for both men's and women's football, has already scored six goals in all competitions this year for Manchester City, including a hat-trick in their FA Cup quarter-final, as well as two goals in league play. While pleased with the players that performed in her stead in the summer, Busby says that they will be looking to integrate Shaw in this camp and in the game to continue improving, with the focus now on back-to-back World Cup appearances.

"We missed her in June, but it was great to see other people step up and do a really good job," Busby said. "Now that she is coming back, we are very excited to have her into the mix with everybody else."