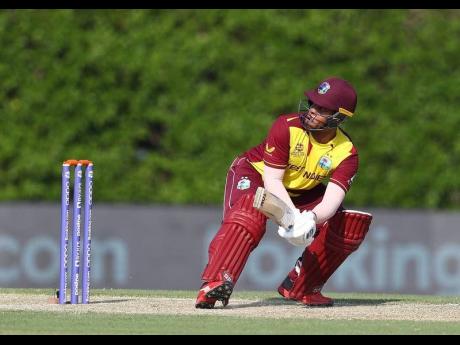 West Indies batsman Shimron Hetmyer in action during his top-score 28 against Pakistan in a ICC T20 World Cup warm-up match yesterday at the ICC Academy in Dubai.

Renowned Barbadian cricket commentator and journalist Andrew Mason says the West Indies' seven-wicket loss to Pakistan in yesterday's ICC Men's World T20 warm-up match is worrying, with the defending champions set to begin their campaign in less than a week.

The West Indies could only get to 130 for seven in their 20 overs after they won the toss and decided to take first strike. Shimron Hetmyer top-scored for the regional side with 28, while captain Kieron Pollard made 23 and Chris Gayle 20.

The Pakistanis made light work of the run chase, losing only three wickets with captain Babar Azam leading the way with 50 and Fahkar Zaman getting an unbeaten 46.

Leg-spinner Hayden Walsh Jr picked up two wickets for 41 runs from 3.3 overs, while Ravi Rampaul claimed the only other wicket to fall.

With the emphatic loss, Mason believes the West Indies have their work cut out with the opening encounter against England just days away.

"The signs are not encouraging at all. It is pretty clear to me that the fellas have not been able to make the adjustments concerning the slowness of the pitches in the United Arab Emirates," said Mason.

The veteran broadcaster says Chris Gayle is under a lot of pressure following his 20 from 30 balls before he got bowled. He is also concerned about the fitness of Jamaican Andre Russell, who he says is the most critical player for the regional side at this World Cup.

"I am very concerned about Russell too. He is a big game player and if he doesn't play, it will be a big blow for the West Indies, because he is a match-winner."

Mason further outlined that the bowling looked ordinary in the warm-up game against Pakistan, but was quick to point out that the Windies can be unpredictable with more than enough proven match-winners in their squad.

With that, Mason says the coaching staff needs to address the batting issues on the slow and low pitches if the team is to do well at the tournament.

"We need the players to have the temperament and work the ball around to get 150 plus scores so that we can defend it. On these pitches, it's going to be crucial to work the ball around and right now, we have only hitters, with Roston Chase being the only exception," added Mason.

The West Indies will have one more warm-up game before they face England in their World Cup opener on October 23, as they face Afghanistan tomorrow starting at 9 a.m. Jamaica time.