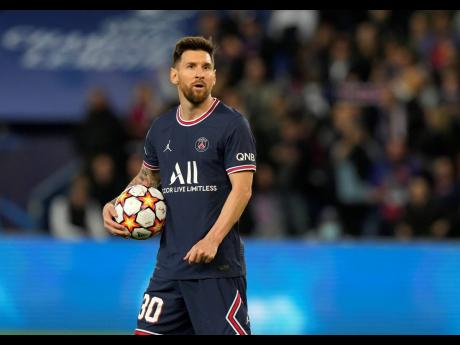 PSG’s Lionel Messi prepares to take a penalty to score his side’s third goal during the Champions League Group A match between Paris Saint Germain and RB Leipzig at the Parc des Princes stadium in Paris yesterday.

Lionel Messi scored twice in quick succession, including an exquisite Panenka-style penalty, to rescue Paris Saint-Germain as they rallied to beat Leipzig 3-2 in the Champions League after being dominated for long spells yesterday.

Messi equalised in the 67th minute, poking home from close range after goalkeeper Peter Gulacsi tipped his first shot on to the post. He then sent Gulacsi diving to the left before dinking the ball softly down the middle for his third goal since joining PSG from Barcelona.

They have all come in the Champions League, with Kylian Mbappe setting up the first two and winning the penalty for Messi's winner against Leipzig in the 74th minute.

Mbappe pointed straight at Messi to tell him he could take the spot kick.

"It's normal, it's about respect," Mbappe said. "He's the best player in the world. I've always said it's a privilege to play with him."

Mbappe then took a penalty in the fourth minute of stoppage time, awarded following a video review for a foul on right back Achraf Hakimi, but he blazed it well over.

PSG are atop Group A with seven points, one more than Manchester City. Leipzig are last with no points.

Mbappe opened the scoring with a ninth-minute goal.

But after that, the visitors took control by pressing high up the field and forcing panicky PSG into numerous errors.

"(Were we) lucky, no? You make your own luck," Mbappe said. "But of course, it was difficult, Leipzig played well. We had some low spells which were perhaps a little bit too low."

Striker Andre Silva equalised in the 28th and midfielder Nordi Mukiele volleyed in powerfully in the 57th, with left back Angelino setting up both with his deft left foot.

PSG were missing forwards Neymar and Mauro Icardi, which gave Julian Draxler a rare start alongside Mbappe and Messi in attack. Neymar has a sore adductor while Icardi was excused for family reasons.

Draxler's instant flick from a long Marquinhos pass put Mbappe through, and he cut past a defender well before slotting the ball into the bottom left corner for the opening goal.