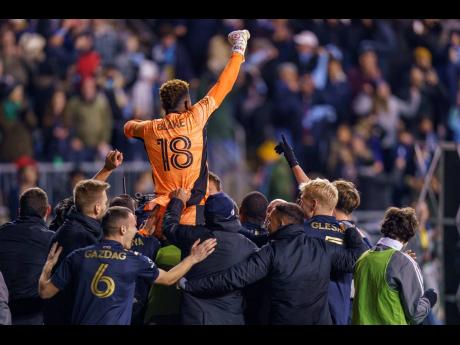 The teams were locked at 1-1 after full and extra time and, in the dreaded penalty shoot-out, none of the four Nashville shots got past Blake. He saved the first two while the third and fourth went wide of the target and into the stands behind the goal.

Earlier, in the game played in Chester, Pennsylvania, Nashville had a lot to celebrate as they took the lead in the 38th minute when Hany Mukhtar headed a well-taken cross inside the left post to beat Blake. Philadelphia, however, found the equaliser two minutes into first-half injury time.

Following a melee in the 18-yard box, the ball rebounded to Daniel Gazdag and he shot past Nashville's goalkeeper Joe Willis from close range.

There were a lot of chances in the second half but both teams were let down by poor shooting. Gazdag did get the ball into the net in the 79th minute for Philadelphia but a goal was ruled out by the referee as there was a foul in the build-up. Mukhtar took the first penalty for Nashville and Blake dived to his left to make a good save. Jack Elliott then stepped up and easily converted his penalty for Philadelphia. Anibal Godoy of Nashville then watched as Blake threw himself to his left to pull off a brilliant save to deny him.

Sergio Santos of Philadelphia was then denied as his weak penalty was easily saved by Willis.Alex Muyl of Nashville put his spot kick wide of the goal before Jack McGlynn sent Philadelphia two up with a cool effort past Willis as the goalkeeper went the wrong way. It was all over when Walter Zimmerman lifted Nashville's fourth penalty just wide of the right post, sending the Philadelphia players, led by Blake, into wild celebrations. Philadelphia will meet either New England Revolution or New York City in the conference final. The remaining conference semi-final will be played tomorrow.