Blake: It was my moment 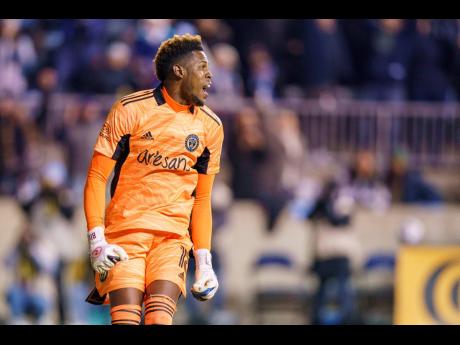 National goalkeeper and captain Andre Blake says he felt it was his time to deliver for the Philadelphia Union in their quest for that elusive MLS Cup title.

The Union defeated Nashville SC 2-0 on penalties on Sunday in their Eastern Conference semi-final at Subaru Park, on the back of two penalty saves from Blake in the first and second rounds, after both teams finished 1-1 in regulation and extra time.

National teammates Alvas Powell and Corey Burke also featured in the game for the Union who will play in their first Eastern Conference Championship this Sunday against either New York City FC or the New England Revolution who face each other today in their semi-final. Blake said after the game that he felt that the moment was destined for him to shine and deliver.

"Soccer is about moments and when it's your moment, nobody can really take that from you or nobody can really stop you. Tonight (Sunday) was one of those moments for me and I'm very thankful for that," Blake told MLSsoccer.com. "We keep working hard and, hopefully, this great moment continues for us."

It was a moment that Blake said he felt turned in their favour after his initial first-round save to deny Nashville SC's Hany Mukhtar, who is an MLS MVP award finalist. Nashville would fail to convert on all four of their penalty attempts.

"I knew that first save would have been very big," Blake said. "That kind of gave me some momentum, gave my teammates some confidence and definitely put the opposite team under some pressure".

It is that momentum which he hopes will fuel them towards their first MLS Cup title, which Blake says would be the culmination of his eight-year odyssey with the club which he has seen from its struggles to its recent successes.

"I've been here since we would struggle to make the playoffs. So this club has really come a long way and this new group of guys over the last three, four years have been doing a fantastic job," Blake said. "But we don't mind staying the underdogs to be honest and just go about our business and just keep winning games and be a team that nobody talks about but a team that's very successful."

The Eastern Conference championship winners will advance to the MLS Cup final on December 11.