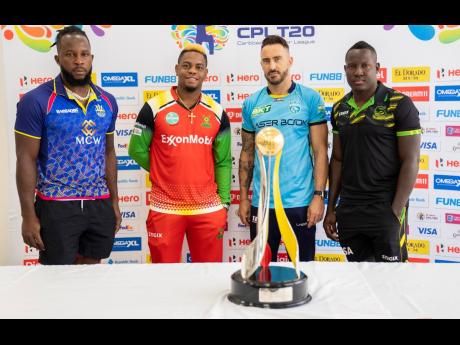 The month-long enthralling Caribbean Premier League (CPL) Twenty20 (T20) competition will soon be whittled down to the final two with the knockout stage getting under way today with a doubleheader.

Two-time champions Jamaica Tallawahs, who finished fourth in the standings, will square off with third-place St Lucia Kings in the second eliminator match starting at 6 p.m. (Jamaica time) at the Providence Stadium in Guyana.

Before that, hosts Guyana Amazon Warriors, who finished second in the table, will battle table-topping Barbados Royals at 9 a.m. (Jamaica time) in qualifier one.

Kings won the only match they played against the Tallawahs this season, with the other encounter ending in a no-result and both know that it's win or go home at this stage of the tournament..

Rovman Powell, Tallawahs' captain, believes the competition's preliminary stage is done and dusted and is ready to move on.

"It's been an up-and-down season for us as a franchise, but the guys have played some good cricket in patches. The guys are up for the challenge and we are looking forward to what the final weekend brings," said Powell.

If Tallawahs are to progress to the championship match, they will have to be at their best twice as the winner of this match will have to play the loser of eliminator one for a place in the final.

Powell believes that being within touching distance of silverware, they will have to get their batting right. This is because the batting has flattered to deceive several times this season.

"This year is a big step-up, for the franchise has not been in the play-offs last year. As it relates to the batting, the guys have the full backing of the staff and coaches and it's just for us to put up our hands and come to the party," Powell said.

Opener Brandon King has so far scored the second most runs in the tournament with 326. Powell has also helped himself handily, scoring 223 runs in nine innings.

In the bowling department, the Tallawahs will be banking on their Pakistani imports of Mohammad Amir and Imad Wasim who has snared 13 and 12 wickets, respectively.

Charles has so far scored 342 runs in eight innings, with four half-centuries with captain Du Plessis also contributing with the bat with 291 runs in nine innings, with a century and a half-century. Joseph has taken 16 wickets at an economy rate of 6.63.